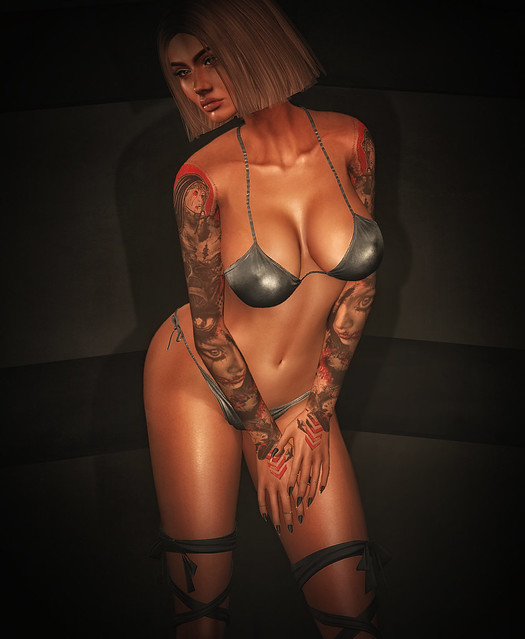 Well The Epiphany is well and truly under way. I was stoked to get some much wanted rares when I finally got it. I really only went for the Genesis Lab head, but got sucked into playing other machines LOL. I won my head, but haven’t unboxed yet…as if you leave it boxed you can exchange for a no trans version which is also Omega compatible. I do love my hairbases, which are mostly Omega, so I’ll have to wait and exchange. I’ve had a few Genesis Lab heads for awhile now, but had been too lazy to make shapes for them.

I pulled Flor out of my inventory for my previous post and have been quite enjoying it so far. I especially love the strong profile all their heads seem to have in common. My only issue is the neck seam/fix. These need to be worked on IMHO, as everything else is top notch. Also, every time I log in/out, my mouth defaults to open…this is probably a setting I’ve overlooked knowing me!
For this post I’m wearing the Anis skin with Flor. I think it works nicely, it did need some shape tweaking and I’m probably still not done fiddling with it haha.
There seems to be a strong liking for thigh straps ATM I’ve noticed. Several designers at The Epiphany were offering shoes with strappyness. The ones I’m showing here are from Breathe. I was lucky to score the fatback on my second go, usually only Whimsy gets so lucky…she who strolls into the Arcade and pulls rares left right and centre on first try!
There were loads and loads of backgrounds and photoscenes to win too, blogger’s and photographer’s heaven! I played loads of those machines, got my rares which I’ll show at a later date. All in all I’ve really enjoyed The Epiphany so far, which are your favourite machines?