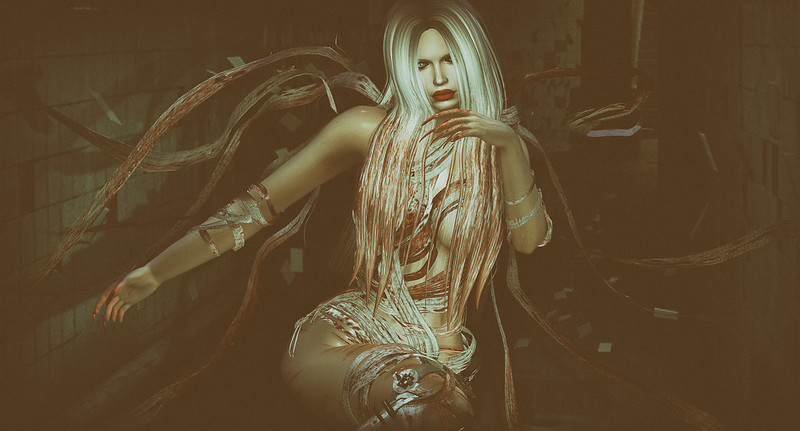 This early morning creepyouout post is brought to you by my lack of caffeine ;)

We had a late night last night watching movies that weren’t meant to be terrifying but ended up being so. For example King Arthur, horrific on two counts, firstly Charlie Hunham’s bizarre accent. He’s forgotten he’s British LOL. Secondly the prosthetics used on David Beckham to make him look like a war weary soldier. Just no!

So I thought I’d do an homage to one of the original and most scary movies of all time, Poltergeist. Everything about that movie freaks me out, especially the “curse” surrounding the cast and crew. My mind kinda went to a “what if Carol Anne had never been rescued from the Beast” place. So here she is, all grown up and ready to claw you to death!

The outfit and tattoos all can be found at the Cureless mainstore. The Scar Tissue gacha is one of my faves, so many gross pieces to satisfy every bloody halloween craving you might have. The hair from Mina goes perfectly, and it’s the best blood covered hair you can get. It really does look like you’ve been rolling around in a pool of blood, or you’ve been soaked with arterial spray.