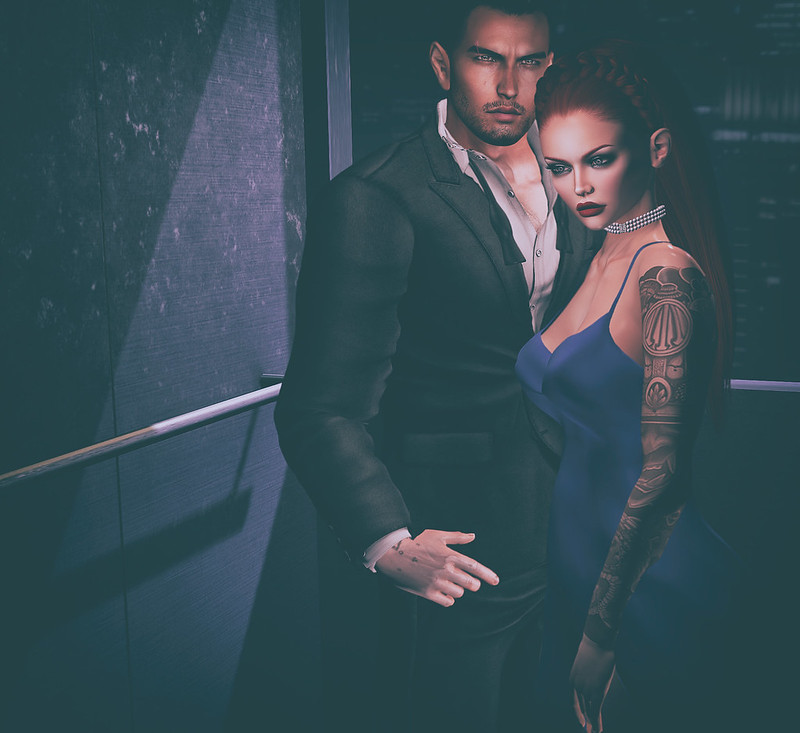 As payback for taking me to a men’s event recently where I was confronted with gratuitous pixel peen, I made Chuck do a photo with me ;)

As soon as I saw the elevator backdrop I knew the shot I wanted and my dress from Narcisse was the icing on the photo cake! You can find the dress at Ultra and the backdrop at Kustom9. The dress has gorgeous sleeves and wrist cuffs which you can turn on or off and also set the transparency, I chose to have them off for this pic.

Slightly off topic, but I had been seeing lots of posts on Facebook about the new Flickr restrictions. Then I saw a post on my Flickr feed about being limited to the number of groups you are allowed to add to. So a picture I uploaded yesterday which had originally been in just under 100 groups was reduced to 60. I did not choose which of those groups were dropped, Flickr chose for me. That didn’t sit well at all so I was pointed to a discussion on the Flickr forums. The venom aimed at SL users was quite frankly disgusting and completely off topic. We aren’t viewed as talented or artistic, one Flickr member said we were nothing more than screenshot takers who ran our pics through Photoshop for 5 mins and uploaded with no thought at all. I know art is subjective, I also know how impossible it is to explain to a non user that everything shown has been created by someone, from the skin we wear to the poses we use. Are RL photo manipulators viewed the same way? What about graphic artists, is their work any less worthy because it isn’t an RL picture?

There is a diehard faction of RL pro Flickr users who completely blame Secondlifers for all the issues there are with spam, bad servers and world hunger. Yes there are people who spam, both Second Life members and RL members of Flickr. However addressing an issue that apparently only affects 1% of Flickr users ( as stated by the Flickr member of staff who started the thread ) by forcibly reducing the numbers of groups you can add to is such a sweeping generalist solution it beggars belief. Surely the onus should be on admins and owners of groups to police themselves. Having said that, if someone submits a photo to 1 group or 100…it has no effect whatsoever on the individual group itself. I admin a few groups and couldn’t give 2 shits if someone puts a pic in my group and 4853463487 others.

Also, maybe it’s time for stores and events to look at the Flickr requirements for bloggers. When I came back to SL after having my son, I had no clue that Flickr views and faves were even a thing. When I started blogging in 2008, we only used Flickr to embed. It was a means to an end, not a site to judge how many sales our photos generated for the designer. There are also Flickr only bloggers. What does this change mean for them? How will they possibly get the same exposure as they’re used to when they are so sorely limited to the groups they can put a picture in? It’s a time of change, both on Flickr and in world. There are lots of things in the blogging/designing world that need to be addressed. Maybe this could be the catalyst to make things better all round?