Can you believe I’ve been up since 5am?!

Sleep eluded me last night for whatever reason, so at 5 I just gave up and got up to have a latte. The toddler heard me however and decided it was time for him to get up and watch The Little Princess…as you do.

Sasy and I hit up Sn@tch yesterday on the hunt for applier latex. You can see the result of that trip HERE. I spent a fortune, like I’d never heard of applier clothing LOL. Sasy is the mistress of mix and match so when she says buy appliers to go under mesh, you just do XD.

My look is a combo of two events, ROMP and Frou Frou…both known for their sexiness. It’s a happy coincidence that both parts of my outfit come from Luas. I didn’t plan it that way, I could pretend I did but that would be a massive fib :P The lingerie is from ROMP and the textures are totally customisable. I chose classic black and red though as it’s my fave. The fur is part of a set from Frou Frou, and it’s gorgeous. It just adds a touch of glam.

I pulled out an old tattoo by White Widow, I love her delicate work. This has since had a version II released but the original is more the look I was after.

I’ve gone a bit nuts buying backdrops and background textures for my studio. I say studio, it’s actually my beach LOL. I’m liking the angle thing now I’ve worked out how to do it, and it really needs an interesting background to make it look amazing. When I was taking this pic yesterday, somehow my camera ended up on our neighbours land…they have Bison. Breedable ones by the looks of it, and they almost ended up in the final picture ;) 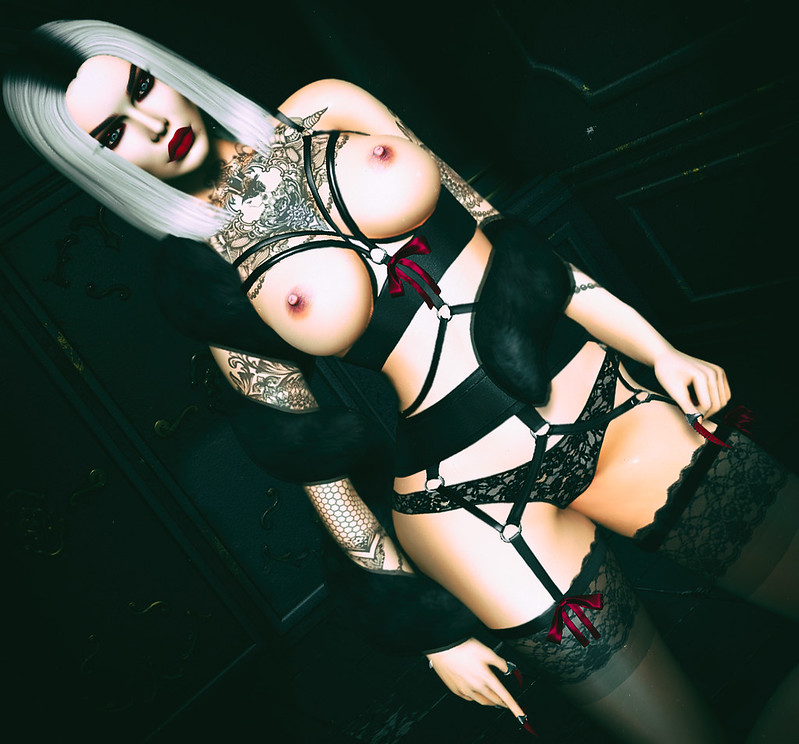