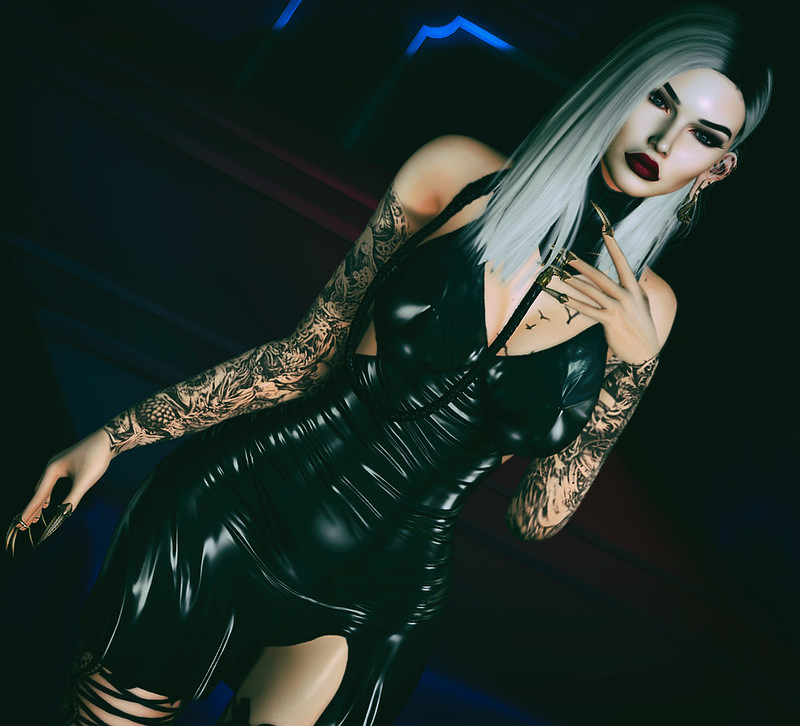 I actually camped outside Kustom9 waiting for it to open. I landed on Jordan Whitt’s head and had a lovely conversation with her and the other people waiting for the event to open. It was much fun XD. The ears in question are the Dragon Ears by Swallow. I had seen them on my Flickr and waited patiently for them to be released…not! Anyhoo, now they’re on my head so :P

Also at Kustom9, Genesis Lab has a lovely Valentine gacha. There are skins and makeups to be won, I’m showing the skin, one of the eyeshadows and one of the lipsticks.

Applique has also opened! My eye appliers and tattoos are from there. I’m particularly in love with the stockings, which are Omega, so can be applied on either clothing or tattoo layers.

My dress is another buy from Fetish Fair. I bought it not only because it’s the hotness, but because when I was shopping I was wearing my Hourglass bod, and this is fitted for the following: Freya, Hourglass, Isis, Maitryea, and Slink Original. This makes me very happy. While I love my Maitreya body, I also love my Hourglass too. I like having choices, and I don’t like the idea that I *have* to wear a particular body. I don’t know who started this single body only exclusive business, but it needs to stop. Give your customers choices and they will love even more than they already do ;)